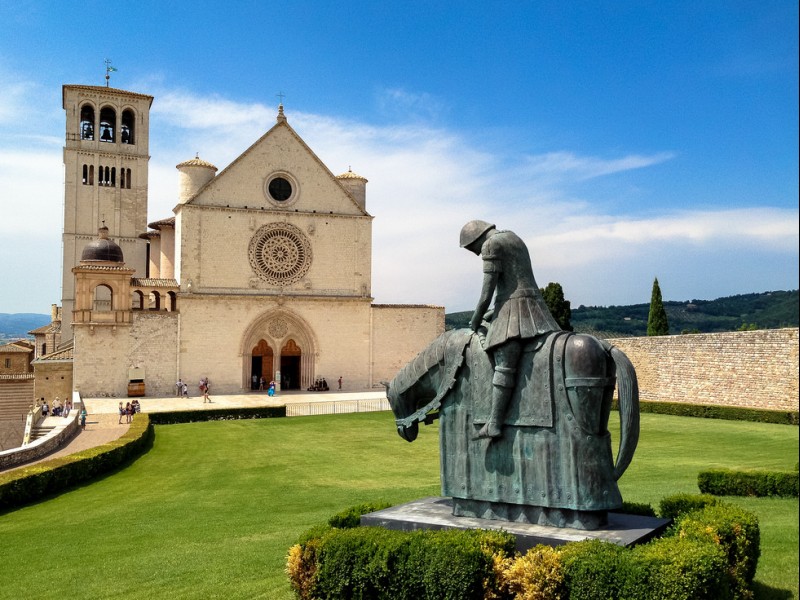 Best things to see in Assisi and Umbria. St. Francis Basilica of Assisi

Basilica of St. Francis of Assisi

Recognized as a UNESCO World Heritage Site, the basilica of St. Francis was built under the direction of Brother Elias, vicar general and architect of the order, starting in 1228, just two years after the saint's death, as a place designed to receive his remains.
Pope Gregory IX laid the first stone was on July 17, 1228, the day after the canonization of St. Francis, in the place previously used for executions and burials of criminals. According to tradition, Francis himself, on his deathbed, indicated this spot to his companions as the place for his burial.

Exterior
The exterior of the basilica has obvious references to the French Gothic in the soaring facade and the bipartite doorway, lightened by the horizontal brackets and rose window with a typically Umbrian appearance, and with a heavy, wide-structured bell tower.
The surfaces are all in stone from Mt. Subasio, which has a pink color during the day and shines white in the moonlight.

Lower church
Visitors enter the lower basilica from the side, through a double 13th c. doorway surmounted by a Renaissance prothyrum.
The interior has a single nave, divided into five bays by low arcades, with side chapels from the late 13th c.
In the first bay, at the entrance, two large 14th c. Gothic tombs are displayed, and, between them, a pulpit with a 13th c. base, with rear additions and reworking.
Opposite the entrance is the Chapel of St. Catherine, or of the Crucifix, decorated with a cycle of frescoes of the Bolognese Andrea Bartoli (1368) and lightened by mullioned 14th c. windows.
The polychrome wooden crucifix on the altar dates to the end of the fifteenth century.
The walls of the nave bear the remains of frescoes with scenes from the Passion of Christ (right) and stories from the life of St. Francis (left), by the so-called Master of St. Francis (circa 1253).
Near the end of the left wall, in a niche above a Gothic dais, is a fresco of the Coronation of the Virgin by Puccio Capanna (14th c.).
In the middle of the nave, a staircase leads down to the crypt; behind the altar is the urn containing the remains of the saint, protected by an iron grate.
Returning to the church, the Chapel of the Magdalene preserves precious frescoes (from about 1314) depicting stories of Mary Magdalene and the Saints, attributed to the school of Giotto, and perhaps including some painting by the master's hand.
The first chapel on the left displays episodes from the life of Saint Martin, by Simone Martini (1312-1320).
In the vault crossing, above the Gothic altar, are other frescoes attributed to Giotto's assistants, including the Maestro delle Vele (Master of the Assisi vaults).

Upper church
If the solemn and dark lower basilica invites penance and silence, the upper church soars into the sky, airy and bright.
In a Gothic style with French influences, the nave has four bays, cross vaulting, and a polygonal transept and apse.
The transept is wonderfully decorated with frescoes by Cimabue, with the famous Crucifixion, scenes of the Apocalypse and Stories of St. Peter. Started in 1277, the cycle has been damaged by changes in which the color white has taken on a dark tone, giving some images an appearance of photographic negatives.
Cimabue and his assistants also painted the four Evangelists on the ceiling above the Gothic high altar and the frescoes with Stories of Mary on the walls.
In the upper portion of the nave there is a cycle of frescoes with Stories of the New and Old Testament, thought to be partly the work of painters of the Roman school and partly by followers of Cimabue.
The space of the narrative scenes is interspersed with windows adorned with medieval stained-glass windows, which, despite the reconstruction, make up one of the most complete such sets in Italy.
The bottom part of the nave walls is decorated with the famous fresco cycle designed by Giotto, who supervised its completion by other hands. The cycle contains scenes from the life of St. Francis, from his youth through death and to posthumous miracles attributed to him, framed by painted architecture depicting columns and brackets.

If you want to visit the St. Francis Basilica with a professional guide, choose one of  our tour in Assisi or contact us 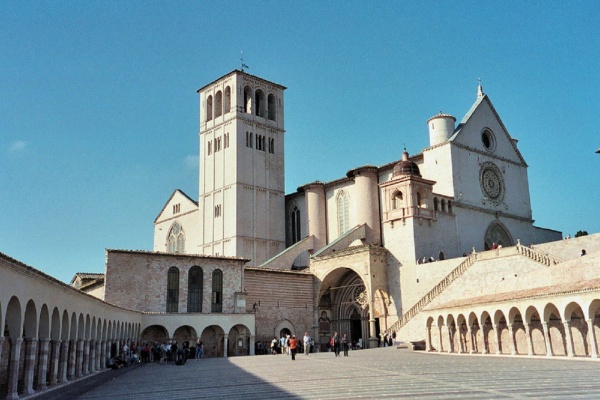 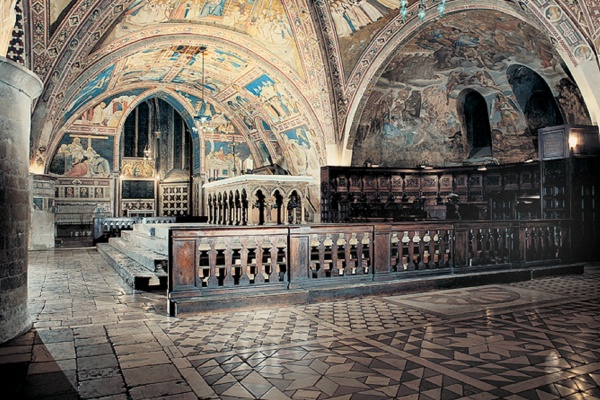 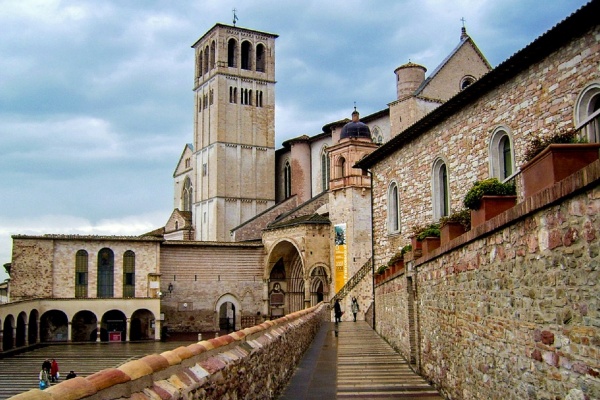 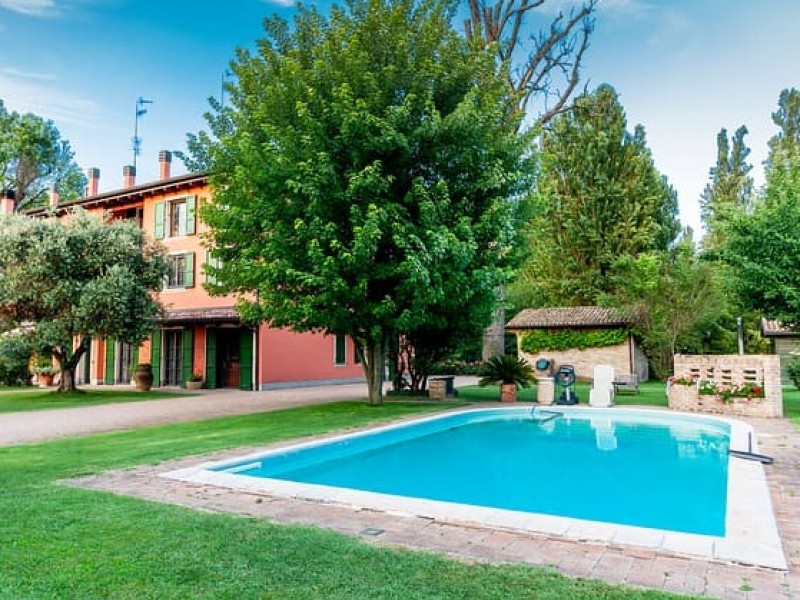 Rent a villa in Umbria - your holiday in Umbria total relax

Vacation villa in Umbria. Rent a villa in the green heart of Italy and enjoy the relaxation and beauty of our region. 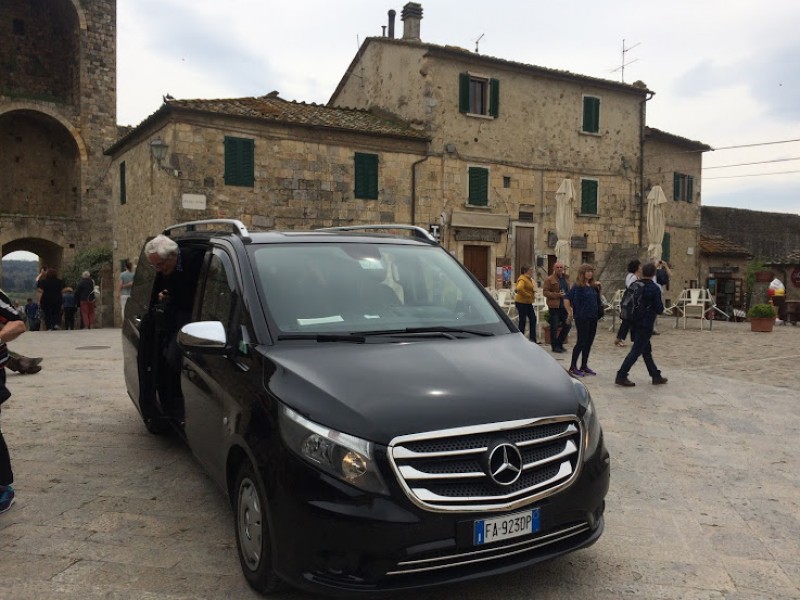 Transfers, day trips, and private transport with drivers in Umbria.

Private driver in Umbria for transfers, day trips and private transport to take you in complete relaxation wherever you want.